The Very Hungry Caterpillar at The Magik

As a mom and early childhood educator, I’m an Eric Carle fan. We love many of his books, including The Very Hungry Caterpillar, so I was excited to learn that The Magik Theatre is taking the story to the stage. This will be the last show in Magik’s 25th anniversary season, concluding with a special extended run at the Charline McCombs Empire Theatre. 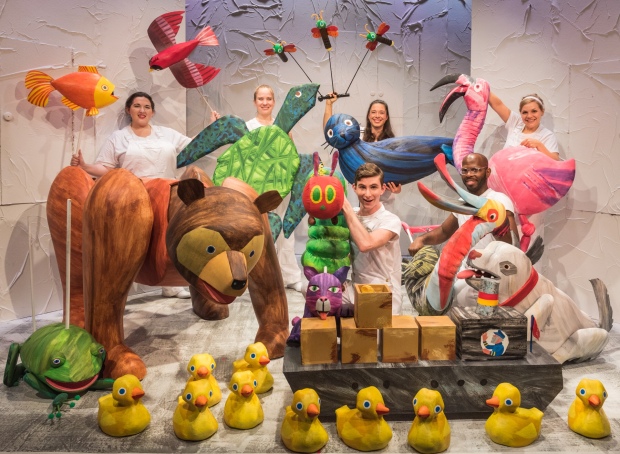 “I hope the performance will be enjoyed by many and that the colorful characters will bring comfort and joy to all who see the stories that have been so carefully produced,” said creator, Eric Carle. “It is uplifting to see such beautiful and cheerful works inspired by my characters! I hope my books – and this show – will inspire you and your imagination.”
Created by Jonathan Rockefeller, this critically acclaimed production of The Very Hungry Caterpillar Show features a menagerie of 75 lovable puppets, faithfully adapting four of Eric Carle’s stories, Brown Bear, Brown Bear, 10 Little Rubber Ducks, The Very Lonely Firefly and of course, the star of the show – The Very Hungry Caterpillar.
The Very Hungry Caterpillar Show runs July 12 – August 4 at The Magik Theatre, sponsored by the Edaren Foundation. For tickets, visit MagikTheatre.org or call the box office at 210.227.2751. Tickets start at $15 with discounts available for students, seniors, military and educators.
The show continues its run August 9 – 18 at the Charline McCombs Empire Theatre. Tickets start at $15 and can be purchased through Ticketmaster.com by searching “Magik Theatre Presents: The Very Hungry Caterpillar”.
Special Performances at The Magik Theatre
Opening Night: July 12 at 6:30 p.m. Enjoy family fun activities at the opening performance of The Very Hungry Caterpillar Show, including crafts, photo opportunities, and more!
Military and First Responders Performance: July 20 at 2 p.m. Magik appreciates all of the selfless heroes in the community who put their lives on the line. To celebrate them, active or retired members of the military and first responders with I.D. pay $5 per ticket for their entire party for this performance.
American Sign Language Interpreted Performance: July 27 at 2:00 p.m. The Magik Theatre is joined by Robert Cardoza, the San Antonio theatre community’s primary sign language interpreter, to offer at least one ASL interpreted performance for every production of the 2018-2019 season, sponsored by University Health System.
**Disclaimer: I was provided tickets in exchange for this post. Opinions ante honest and my own.

← The Magik Theatre Presents Mariachi Girl: A Bilingual Production
Bunnicula at The Magik →